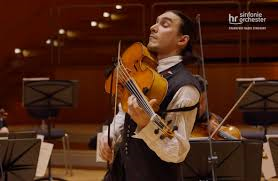 I have just had the wonderful occasion to see and listen to two splendid concerts, in streaming, whose soloist was the same musician, the Russian violinist Sergey Malov. Both concerts were performed by the hr-Sinfonieorchester – Frankfurt Radio Symphony directed by Andrea Marcon, Italian harpsichordist and organist.

In the Mozart concert Sergey Malov has played a violin, in the Boccherini one an instrument I didn’t know before: the “cello da spalla”: fascinating! In this same concert the director Marcon has played a harpsichord while directing.